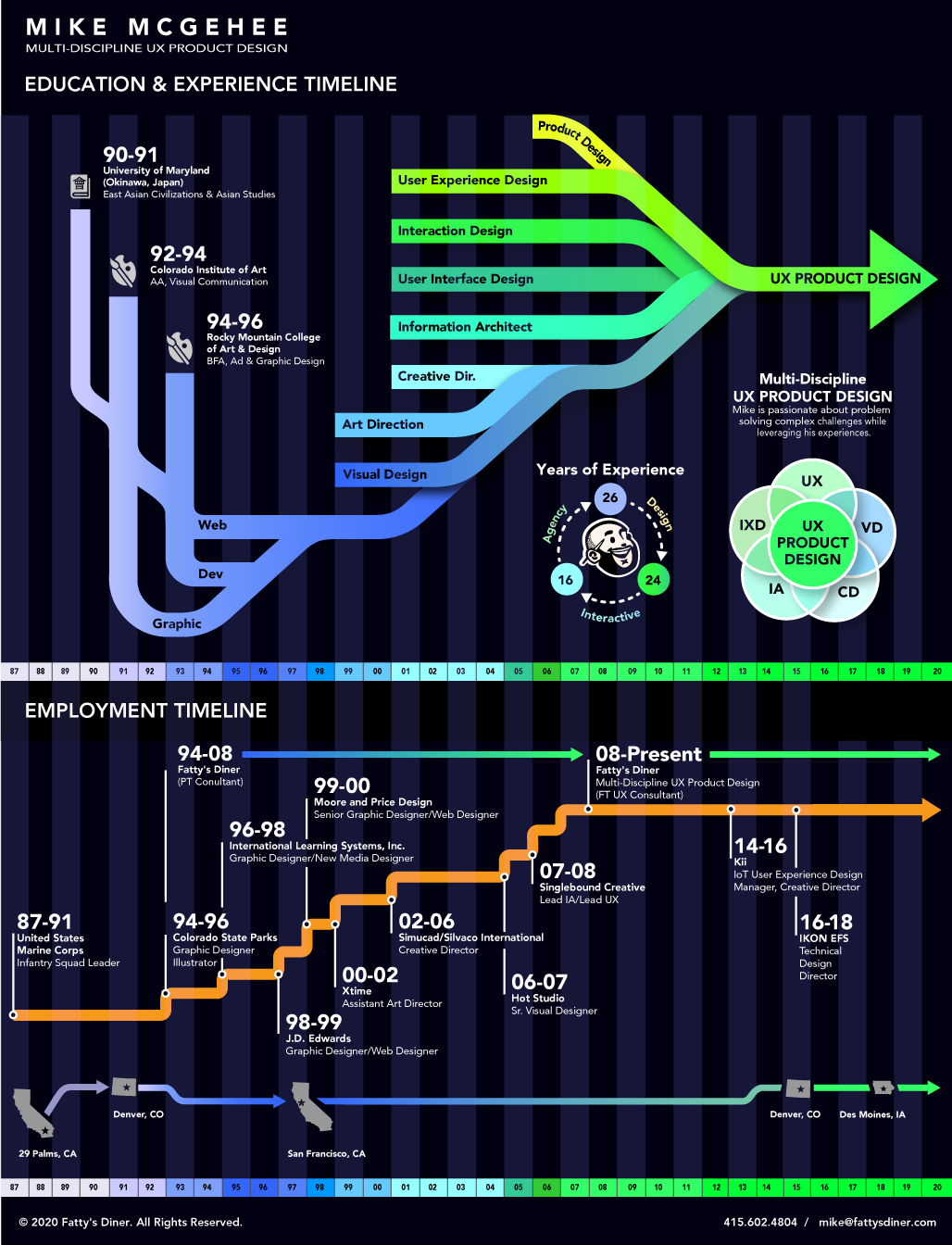 
Mike grew up in Iowa… the place where corn is king and yes he ate lots of it.

Mike served four years in the United States Marine Corps and caught the travel bug… he has never been the same since. After his Honorable Discharge, he attended the Colorado Institute of Art and the Rocky Mountain College of Art & Design in Denver, CO.

A few years after graduating, Mike had moved to San Francisco, CA, where he lived & worked for twenty years… it was the right time and right place. He had honed his craft, tools & experiences at the tech epicenter of North America.

In Mike’s time off, he loves traveling to Europe, Asia & South East Asia. Mike is an avid motorcyclist and has traveled by motorcycle all over the South of France, South Vietnam, and every state in the Western US. Mike also enjoys camping, overland expeditions in his Jeep and spending time and activities in the great outdoors.


Mike is cross-functional and collaborative, he loves exercising both sides of his creative and analytical mind in solving complex problems for all Applications & Software for; Mobile, Tablet, iPad, Desktop, Web and IoT Devices.

Always have a deep Empathy for the End User, Identify pain points, Gather Data, Pave the Journey, Design and Expand on those findings, Collaborate, Design, Build, Test and Iterate your Product while constantly Championing the End User.


Mike has been in many leadership roles in his career. In addition to his roles during his Marine Corps as a Non-Commissioned Officer leading and mentoring junior Marines in training, tactics, and daily activities, he has mentored and lead fellow team members on many UX projects such as Junior Designers, Senior Designers, Visual Designers, Developers, and Engineers.

My Leadership example is that I will never ask someone to do something I wouldn’t do myself and leave you hanging. I’ll roll up my sleeves, dive in and help you work through the challenge at hand. We can reflect on and enjoy our shared success.


An artist and designer that has juggled these roles with renowned Agencies such as Archer Design, EVB, Grand River, Hot Studio, Lean TECHniques, Moore and Price Design, Odopod, Publicis Modem, Razorfish, Real Branding, Sequence, Singlebound Creative, The Linus Group & YW Design and many others. His work & clients draw from a wide range of markets.


User testing has been his best teacher, He was once was conducting guerrilla user testing and the candidates were not exactly the demographic he had anticipated but being non-technology users or computer owners, these users had gifted him the most valuable feedback and data that they received, this was far beyond what they could ever imagine… that experience opened his eyes to the immense value of user and usability testing.